i think i’ve said before, i don’t do a lot of seasonal decorating. christmas is pretty much the most i do, and frankly, when i got out our decorations this year, i still felt like i don’t do a ton. maybe it’s a time thing. maybe it’s a “we have two young boys” thing. but i can tell you that this year, i felt the pull to add more to the house. (i blame the balmy december weather for this. i’m certain if there was snow on the ground, i wouldn’t be trying to fill the “holiday cheer” gap with more garland + more sparkle!)

so, in the absence of snow, i trekked myself out to michaels and hobby lobby and worked to add a little more decked to our halls.

here’s a little rundown of what we do in the re-nest house: 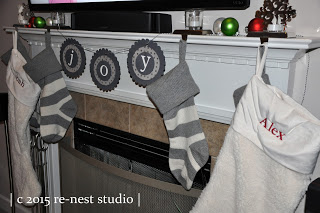 1. the mantle. which includes a giant tv hanging over it (anyone else feel me?) oh, and on the mantle, there’s some sort of center channel/sound system thing that is permanently placed under the tv. which makes dressing the mantle in the traditional sense, a total fail. so, i go pretty minimal: a simple “joy” banner, four stocking holders, a couple of tea lights, and some placed bulb ornaments on the mantle. that’s it. there’s really no more room for anything else. 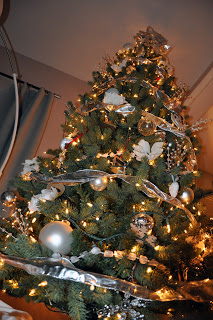 2. the main tree. this one is in our family room, and is 9′ tall, pre-lit, and glorious. this one is what i call “mama’s tree.” it’s silver + glass + grey + ivory. but for some reason, this year when the tree went up, it felt sparse. mr. re-nest + i went about looking for a new tree (this one is seven years old), because we just felt like this one was losing it’s fullness. then, we were astonished at the prices. so, we said, “a little fluffing and some extra berries and such, and it’ll be totally fine!” so that’s what we did. i picked up some great white poinsettias, some white + sparkly flowers, and some more white berries. and, voila! the tree looks like a tree again! 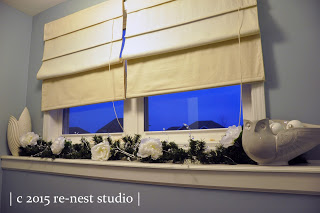 3. the window ledge. so, the stairs going down to our basement are open + finished. you go down eight steps, there’s a landing, and eight more steps and you’re in the basement. well, at that landing, there is a window ledge that is at ground-level (really kind of cool). normally, there’s two vases + some dying plants there. i decided to spruce it up for the holidays with some garland, some sparkle + some more floral this year!

and, just in case you want to see some more, here’s some of what we do ’round here….little decor pieces + such to help us all get in the holiday spirit! enjoy…xoxo! 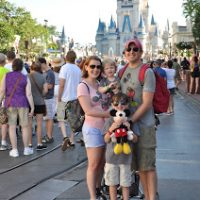 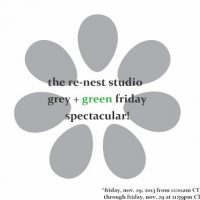