i’m going to stop right here and throw major props to the etsy artisian/lego extraordinaire brackdaddy. he is the one that developed this lego costume pattern and decided to be nice enough to put it together in a pretty pdf and sell it on etsy. to him, i am forever indebted. if you’re curious, please visit his etsy shop here. he’s an engineering genius.

so, yeah. about three weeks ago, i decided it was time to buckle down on this whole “mama’s gonna make the halloween costumes this year” thing, and i went shopping. i was starting with little mr. re-nest #2’s costume. i sketched it, and it seemed simple. it wasn’t too bad. i think i managed to finish it in about three hours once i started it. that at least gave me the sense of accomplishment and satisfaction i needed to dive head first into a five-year-old sized version of this…

i did what any person would do. first, freak out a little. second, read the instructions. one.page.at.a.time. fortunately, brackdaddy had the forethought that there would be lots of parents attempting this (probably three days before halloween) and put the easy stuff up front. the legs. then the body. then the waist. the arms. and finally, the piece de resistance (no pun intended): the lego head, in all its bright yellow glory.

the steps were many and the glory was great….i can’t tell you how amazing it feels to have made this little dream come true for my little man. what do you think?

a couple of questions we’ve been getting about the costume:

1. what’s it made out of? surprisingly, camping mats. three of them. so the material is super lightweight. and lots and lots of hot glue.

2. what kind of paint did you use? krylon spray paint.

3. how did you make the hair? i’m pleading ignorance here, and proclaiming total envy to mr. re-nest and his abilities. i had the head all completed, and mr. re-nest sat down with it, made a pattern for the hair, and went to town with a hot glue gun. and, yes it’s removable.

4. can little mr. re-nest #1 see out of the mask? yep! based on where the costume hit him, he actually was able to see out of emmet’s mouth.

oh, and p.s. i do honestly now have about six pounds of quick cooking oats in my kitchen from this project. if you attempt this costume (or any other that requires the purchase of multiple cans of quick cooking oats), here’s a great muffin recipe that you can use to use up some of those oats! 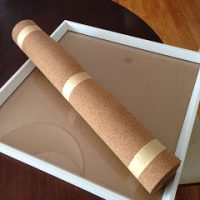 the new craft area: showing off our stuff 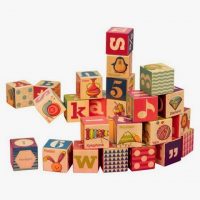 abcs for a baby-to-be! 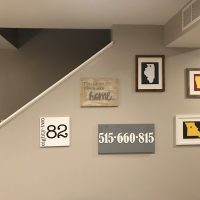