Shop
the party has wrapped. part of me is relieved, part of me is tapped out of ideas of what else to do with black and white checkered anything, and part of me is already thinking “what do i do next??”

this party was kinda a big one. i didn’t realize quite how big it was becoming until my family was in town, and they started asking what party decorations they could help with. i think the breaking moment was when i said, “well, i have two liters of soda, and we’re going to peel the labels off and put rust-eze labels on them.” that was met with some blank stares and a few smiles. and it was met with: “well, how are people going to know what’s in the bottles?”…and without missing a beat, i replied, “oh, i have these labels that i made for the table that will go in front of the bottles.” that was the moment i knew i had just gone and gone and gone with party planning and i didn’t realize how far i’d gone.

but let me say this: i don’t regret a single part of it. i loved every single little thing i made and every minute i put into it. my little boy may not have cared that he had all these handmade decorations, but it was therapeutic for me.

so this post will feature all of the signs and banners and such that adorned our house for the big three. all in all, there were five banners, and one outside sign (adorned with real tires, no less), some popcorn cones, lots of candy and two different birthday cakes. overboard? nah.

i started with a piece of red foam core board…easily purchased at hobby lobby. also very important: black and white checkered ribbon (2″ wide) also purchased at hobby lobby. next, i planned out the sign artwork – simple black and white checkered and solid black circles cut with the plantin schoolbook cricut cartridge. the letters also came from the same cartridge, cut in red, yellow and green.

to give some stability to the foam core (since we have have some vicious winds in these parts), i picked up two very sturdy dowel rods (square-shaped) and simply added a little hot glue to adhere them to the sign.

i have to give some big credit to my husband who came up with the idea of how to set this sign up…side note: my husband has an obsession with tires. i can’t tell you exactly how many tires we have in our garage, but we have three cars and i can say with certainty that we have more than the twelve required to drive those three cars. so the loving husband that he is, he offered to get some of those tires out of the garage and donate them to the party effort. with a couple of tires, our sign, some plastic black and white checkered flags (from oriental trading) and some yellow cones (from the target dollar spot…woohoo!), we had a nice little entry into the house. 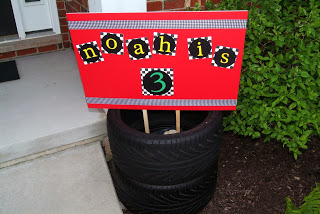 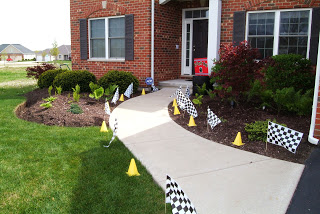 in kinda similar style and fashion to the second birthday banner, we had a big “happy birthday noah” banner to give us a little extra something for the kitchen/main party area. i went pretty simple – three different styles of 2″ wide ribbon, black and white checkered paper, white paper and black paper, all cut with the cricut. pretty simple and it gave us some nice little decoration to the main area. 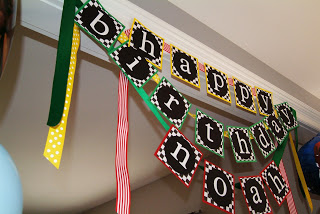 so i’ve mentioned my new obsession with bakers’ twine…and when i have a huge spool of it, i have to use it for something. which meant making the little banners. a banner for the mantle, two banners for the upstairs banister (looking into our foyer), one for the table and one for the kitchen. it was banners galore in our house. 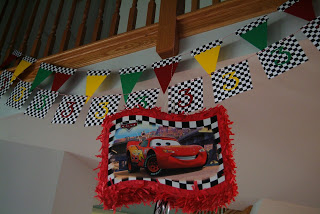 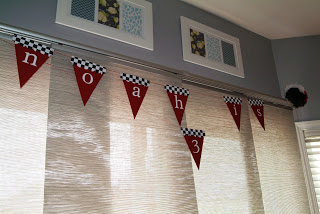 super simple. and it helped use up my supply of black and white checkered scrapbook paper that seemed to be growing in my stash. i had come across this idea on pinterest and thought popcorn would be a great non-sugar snack for the kids to have. i tracked down a handy cone template for tracing here from hostess with the mostess. i cut out about twenty of these and with a little double-sided tape on each side, i simply wrapped the cutouts to make the cone.

what needed a little more thought was how i was going to present these…during a trip to hobby lobby, i came across a great clearance deal on a round, shallow clear acrylic bowl. then to figure out what to put in it that was strong enough to keep the cones upright…skittles. bright colors that matched the party theme and of course, more sugar. they were a total hit with the kiddos.

like i said, this was the moment of “too far.” but again, i saw a similar idea online and thought it was a nice touch. i printed out a bunch of the rust-eze logos, hand trimmed them, all with the idea of replacing the soda bottle labels with the rust-eze labels. the hard part that i totally didn’t expect was getting the coke, diet coke, etc. labels off of the bottles…i think there might have been some goo-gone that was used in the effort to get my rust-eze labels on the bottles (thanks hubby!) 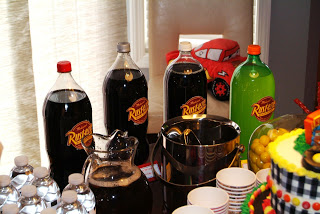 nonetheless, i thought they were cute.

i can take zero credit for both of the cakes we had at the party, except that i placed the order for them. the first one was a cake i saw through a google search for “cars birthday cakes.” i saw this cake and was in. love. (note: i love cake. like, i believe cake is a food group. and even more, i love, love, love a beautifully decorated cake, and have total appreciation for anyone who makes amazing cakes.) i consulted with a local bakery that has done each of noah’s birthday cakes – sweet dream desserts and catering in sycamore. amazing cakes. i took in my picture and placed the order and hoped it would come out something like the picture.

the results were truly incredible. i can’t even express how happy i was with the outcome and just how perfect the cake was. i’ll admit, it very nearly brought me to tears.

then, of course there was cake #2. i was set on cake #1. order was placed. then our neighbor sent me a link to another local bakery that just happened to feature a 3-d lightning mcqueen cake on her website. it was insane. we were going to have more cake than any one party would need. but i went for it. and polka dot bakery totally came through. amazing work, and the cake was wonderful! 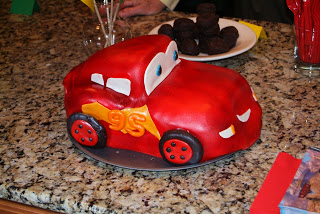 overall, the party was a hit. to be honest, i’m still recovering and it’s good that there will be plenty of time to regroup before the next party has to be planned. but i had an amazing time getting all of it ready. and seeing the smile on my little boy’s face when he finally saw he got his lightning mcqueen party made all of the late nights and prep work totally worth it.

p.s. some of the other things you probably saw in the pics above that i was crazy enough to do:

1. candy jars for kids to make their own treat bags.
2. twizzlers in glass jar.
3. chocolate donuts…stacked as “luigi’s leaning tower of tires”
4. pinata. there was enough chaos. we didn’t even put a single piece of candy in it. 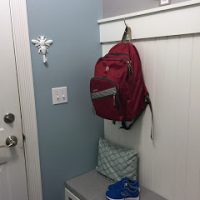 re-nest life \ and, we’re back to school 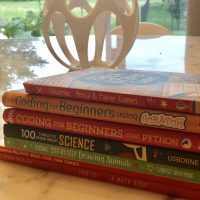 how we’re fighting the summer slide 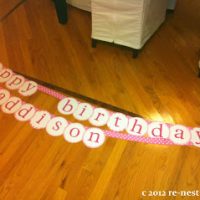 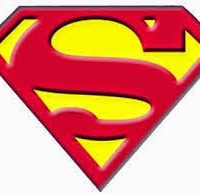