yeah, you know the rest…i swear, writing this, it still amazes me somedays that i was blessed with two boys. these two little guys have opened my eyes to a whole new world of boyhood that i never knew…

but that doesn’t mean that this mama can’t blend my boys love for all things boy (think superheroes) with my love of making sure that our house looks nice. (confession: i might have pulled off some jedi mind tricks to make it happen, but nevermind about that…)

so, little mr. re-nest #1 is obsessed (i reiterate, obsessed) with all things superman. good lord. one day before christmas, we were on a relatively innocent trip through hobby lobby for my usual canvas + acrylic paint shopping trip, and we mistakenly walked by the metal sign home decor area…which happened to be filled with various superman designs. to say that we stopped and looked would be a tremendous understatement. we stopped. begging ensued. reminders started that christmas was right around the corner, and well, wouldn’t it be nice to put some of these signs on your christmas list? more begging ensued. i had to take pictures with my iphone to have a reference to send to santa. and, i probably bribed him with candy just to get him away from that section.

fast forward to christmas: presents are being ripped open, and lo and behold, sissy came through! (sissy is my sister….the boys’ term of endearment for her.) we had a couple of bright and shiny, new superman metal signs from hobby lobby! oh, the excitement to get them placed in his room!

let’s just say, i had one idea as to where they could go, + my five-year-old opinionated son had another idea. who won? do you even need to ask?

i had one goal with getting these included in little mr. re-nest #1’s room: do it without adding any more holes in the wall. mission: accomplished.

when he was born, i ordered two of the espresso gallery frames from pottery barn kids (18″ x 18″ with the 5″ x 7″ opening). way back then, i placed some fun numbers scrapbook paper in the openings, and called it a day. that stayed that way until two weeks ago when i had a brain wave…

and, it worked! i was able to take my frames, remove one of the spacers in the frame, and place the flat metal sign in the frame (with the glass included!) what do you think? (our little superhero loves his new decor!) 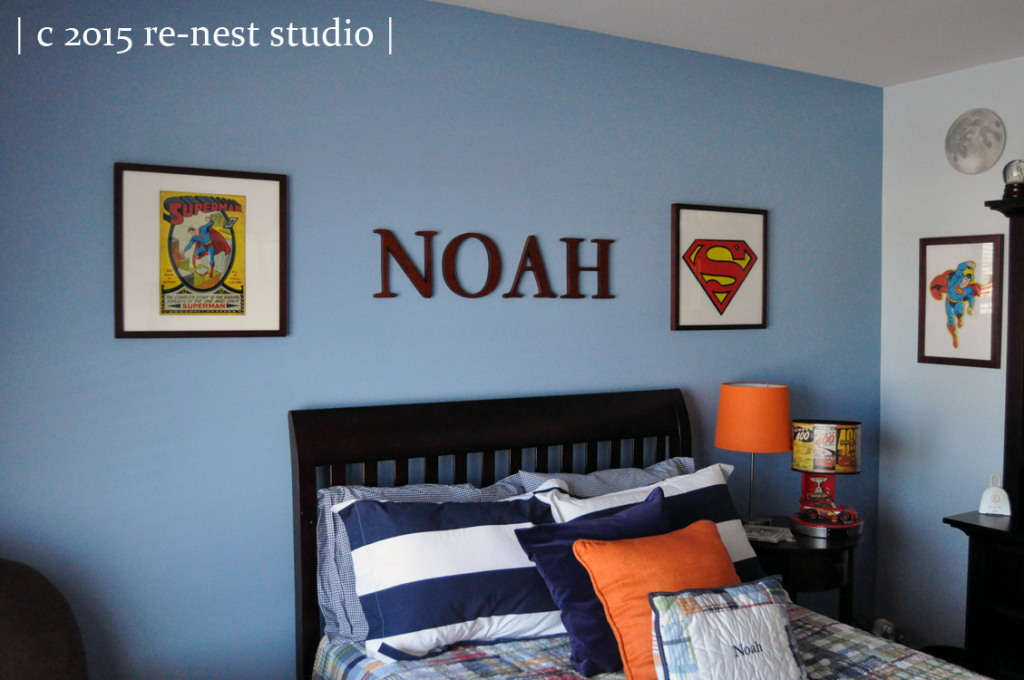 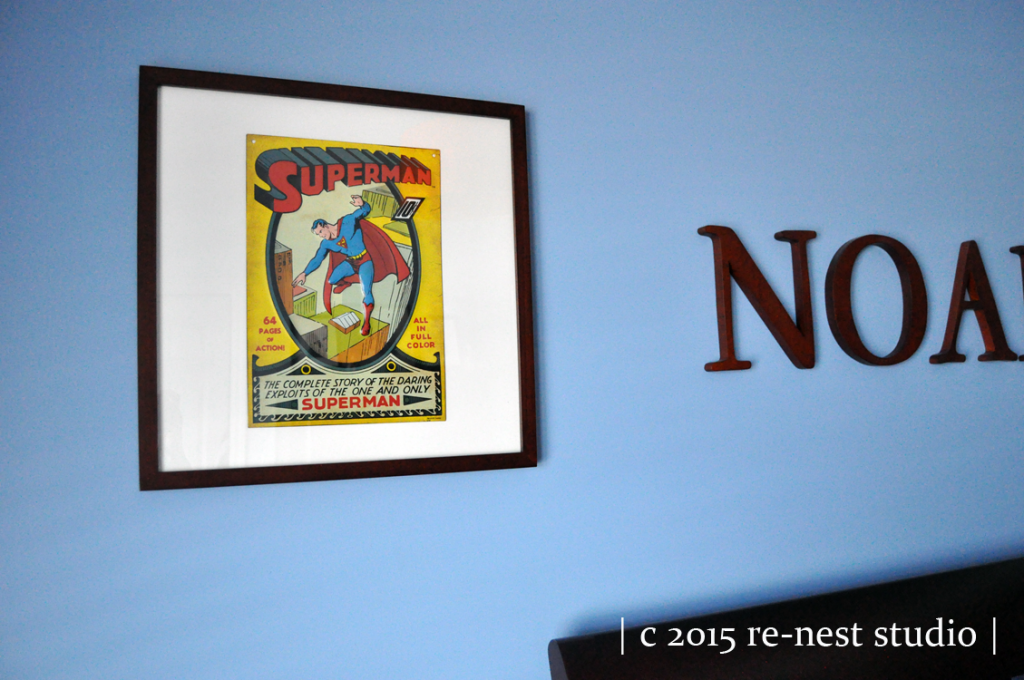 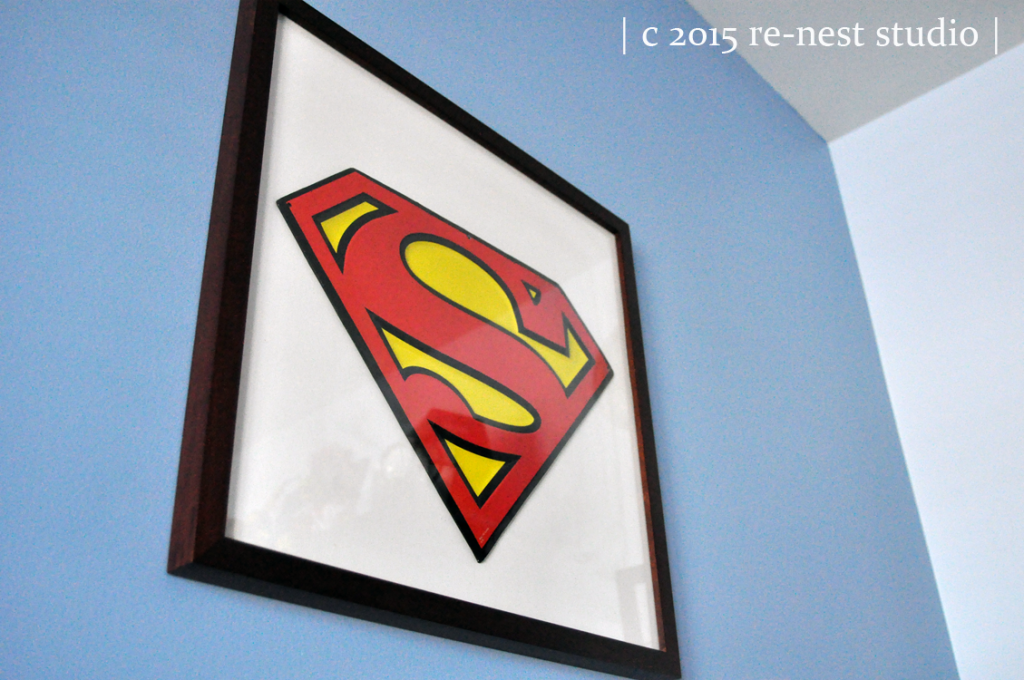 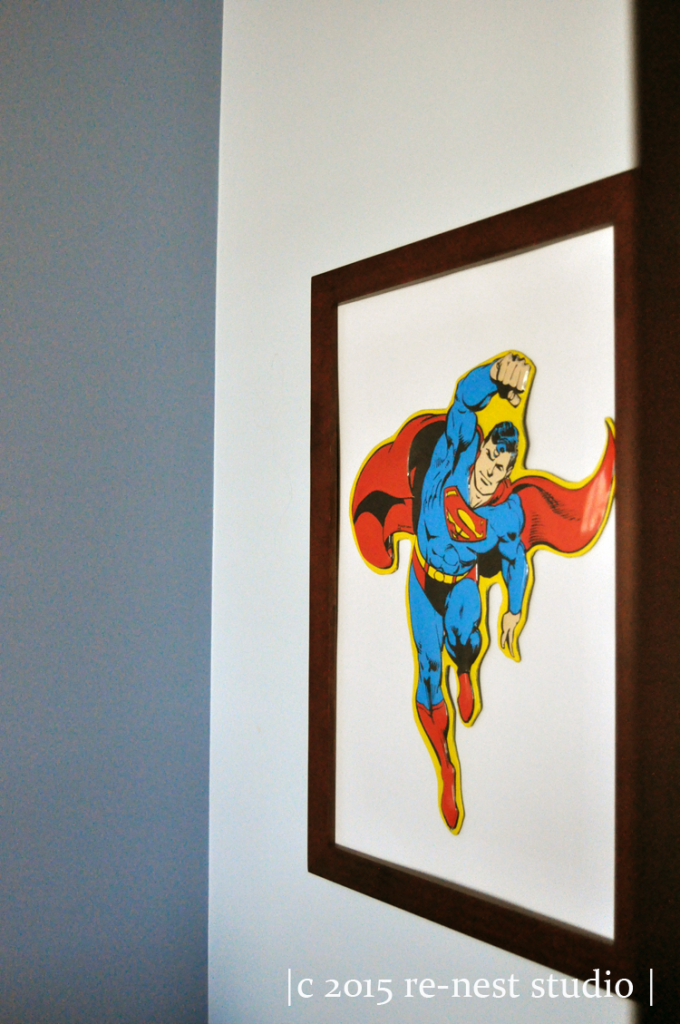 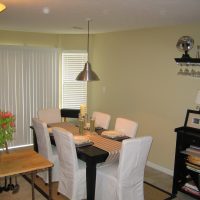 a change in taste 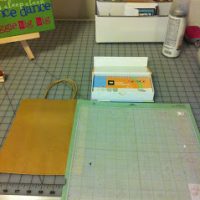 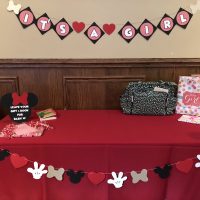 love for the happiest place on earth!