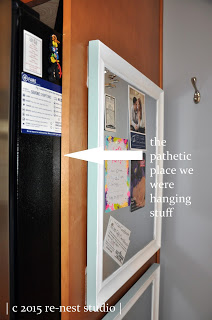 i can’t even count the number of adorable invitations, birth announcements, cute pics + stuff that we always have floating around. and, i have this horrible habit of putting them in a pile, and then moving that pile around to various places in the kitchen. could we put them on the fridge? yeah….but we just haven’t. for a while we were putting stuff in this horrible, maybe five-inch wide space on the side of the fridge, but stuff always fell. i’ve been dying to do a galvanized metal board in our kitchen for months, and i had finally, finally, finally gotten mr. re-nest on board.

after scouring pinterest, i found this. it looked like an awesome idea + one i could totally pull off. all i needed was time.

and then, i happened to be in michael’s this last week. normally i go in on a mission. (mostly because i usually have all of about five minutes to get what i need, or i have two munchkins with me and i’m trying to keep one from throwing boxes of kinetic sand in the cart while the other wants to run away from me.) but this time, i was alone. (woohoo!) and, front and center as i walked in, i saw these framed, galvanized metal boards. they were perfection. plus they were buy one, get one 50% off. i snagged two of them.

i knew i wanted to personalize them a bit, maybe brighten them up a touch with some paint.

i started out just with the idea to paint the frames white. after a couple of coats, and taking another look through my paint collection, i saw this gorgeous sea foam green that i had in my stash. and, then i got the crazy idea to use the sea foam on the outside edges of the frame, for a little contrast.

after a couple of hours of being coated in paint + adding some command strips on the back, we have two pretty cute galvanized metal boards in our kitchen! (p.s. the top one is for grown-up stuff….wedding invites + such; the bottom one is for magnetic abcs + 123s + all things for the boys!) 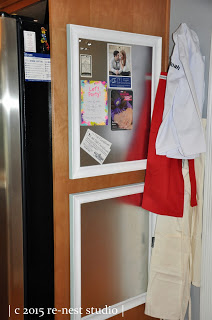 tell me: where do you keep invites + stuff in your house? the fridge? a cork board? in a pile? 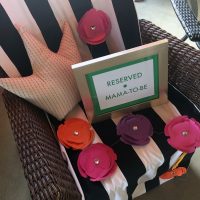 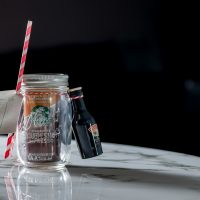 a re-nest diy // a simple DIY holiday gift for anyone on your list!